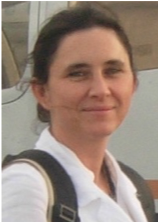 Renata has 5 relatives with BCM. In 1992 she earned a Ph.D. in Theoretical Physics, then worked in research about supercomputing and sub-nuclear physics until 1994. From 1994 to 2008 she and 3 other shareholders founded a web company, venere.com, the first on-line reservation system for hotels on Internet, gathering more than 20,000 hotels especially in Europe and employing more than 200 people. She sold Venere to Expedia in 2008. Dr. Sarno created a BCM Families website that has developed international contact among families coping with Blue Cone Monochromacy (BCM). She supports significance research to lead to an understanding of the physiology and genetics of BCM.

We are happy to celebrate with you 5 years of BCM Families Foundation!
We also want to remind you that today, 20th of May, is International Blue Cone Monochromacy Awareness Day.
We are rare but together we are strong! And together we can reach a #cure4BCM!

This Thursday is Rare Disease Day! Share our posts and be part of finding a cure for BCM. Take a minute to spread awareness today! #BCMFamilyFoundation #Cure4BCM #GiveToday