BCM has a long history of clinical, electrophysiological and psychophysical investigation and there are now studies that clarify the molecular genetic basis of these cone opsin deficiencies [1,2]. With the molecular genetic understanding of BCM and successful retinal gene therapy trials of other genetic conditions, it was natural to ask whether BCM would be a worthwhile target for gene augmentation therapy. This had to be determined and not simply assumed. The specific question asked was if there was sufficient L/M (red/green)-cone structure in BCM to warrant gene augmentation therapy in humans. A cohort of BCM patients with large deletion mutations involving L/M-cone pigment genes and/or their upstream regulatory elements were studied in detail by optical imaging methods, and evidence was provided for a reduced number of residual L/M cone cells with abnormal but detectable outer segments in the central retina [3]. It was concluded that there could be potential value in gene therapy of BCM, but the fragile central retinal structure in BCM would make a subfoveal injection (a common gene delivery method to the ‘outer retina’) a less attractive choice than, for example, intravitreal delivery. A limitation of intravitreal delivery in a retina-wide cone disease is that the only retinal area receiving treatment is likely to be the foveal region. Yet, one step at a time – evidence was provided that BCM was indeed a target for treatment.

Are we able to use conventional clinical testing to monitor effects of a therapy in BCM?

Safety parameters, the primary outcomes of an early phase clinical trial, would monitor for systemic as well as ocular toxicity, and would include the routine eye examination and the imaging method known as optical coherence tomography (OCT).

The latter method could also be used for pre-enrollment imaging to select candidates with detectable foveal photoreceptor nuclear layer and cone outer segment structure [3]. Secondary outcomes for efficacy would include, of course, measurement of best-corrected visual acuity.

Other than visual acuity, are the instruments and techniques currently available in most clinics to test vision able to produce sufficiently clear results that would allow them to be used as efficacy outcomes for an early phase clinical trial in BCM? A cohort of patients was recently studied to make recommendations for efficacy outcomes (in addition to visual acuity) that could detect L/M (red/green) cone improvement [4]. A standard method of isolating cone visual function is with the use of a background light that is bright enough to substantially desensitize rod (night) vision but only minimally affect cone vision. A counterintuitive result was obtained when BCM patients were asked to identify L/M stimuli on this standard background light. 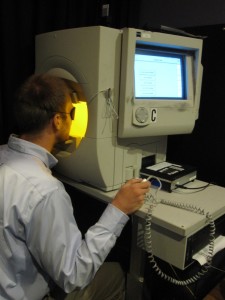 The targets were seen by the rod system; shorter wavelength stimuli were seen either by the S- (blue) cone system or the rod system, depending on the retinal location and specific patient. The standard background light is the luminance of a white paper in typical indoor lighting, and it was somewhat unexpected to observe retained night vision under day vision conditions in BCM. The existence of functioning rods (in addition to S-cones) likely explains the normal or nearly normal kinetic visual field extents (performed on the standard background light) in BCM patients. It can be concluded that kinetic perimetry (with large size stimuli and the standard background) is undesirable as an outcome of L/M-cone efficacy in a BCM clinical trial. Results with computerized static perimetry with white and 600-nm (orange) stimuli on a background light were significantly abnormal in all BCM patients but it was shown that the light-adapted static perimetry with white stimuli was likely driven by the combination of rods and S-cones, whereas visibility of 600-nm stimuli was dominated by rod function. Such results again proved that the usual clinical testing methods could be deceptive and confusing not only about baseline vision results but also about outcomes of a clinical trial in BCM patients.

BCM patients, under dark-adapted conditions, showed large losses of sensitivity at longer wavelengths but not at middle wavelengths in the central retina. This type of two-color dark-adapted threshold testing at the central retina can be thus considered as an outcome measure (assuming foveal L/M-cone targeting from intravitreal injection) where an L/M-cone based improvement would be expected to improve the long-wavelength thresholds while the middle-wavelength thresholds remained unchanged. Similarly, a novel chromatic microperimetry method was used for measuring visual function at the anatomical fovea and tested under real-time retinal tracking. Results showed that with colored backgrounds and different colored stimuli, the substantial loss of L/M-cone function could be isolated. This was the prelude to development of the outcome measure described in the next subsection.

By clinical observation, eye movement abnormalities (nystagmus) could range from mild to severe in BCM patients and have been reported to become not noticeable in some patients with age. Rarely, analyses of eye movement recordings have shown pendular nystagmus of various amplitudes, and location of fixation, when quantified, was found to be foveal or parafoveal. Since in some conditions eye movement characteristics are strongly influenced by visual feedback, eye movement recordings in BCM were performed under careful control of the visual environment [4]. Eyes were dark-adapted, and patients were directed to fixate to a single stationary visible target in darkness; fixation location and stability were recorded under infrared view of the retina. Oculomotor abnormalities were found with pendular as well as jerk components along horizontal, diagonal and vertical directions; amplitude of eye movements could span a wide range and the average location of fixation could be centered on the fovea or in the parafovea. Quantifiable recordings such as were performed would be very important to obtain before and after treatments directed to the foveal region since possible increases in L/M cone sensitivity could cause changes to the fixation location and to fixation stability.

Further studies are needed to define the variability of a subset of the measures mentioned above that could be used as outcomes in future BCM treatment trials.

A modern system to determine cone spatial resolution under visualization of the fundus in a BCM clinical trial: feasibility studies

It would be a distinct advantage in a BCM clinical trial to be able to measure spatial resolution with more than conventional visual acuity. Standard high contrast letters under free viewing conditions are usually used to evaluate the resolving power of the L/M-cone system. In BCM, however, rod (and sometimes S-cone) photoreceptors can dominate low levels of vision even in daytime conditions (see above). An overarching aim of treating BCM is to improve L/M cone driven vision of the patients. We also must be ready for the possibility that early phase therapies could result in incremental improvements and the detection of such improvement within the context of the native vision of these patients will require specialized outcome measures.

Very recently, a modification of an available instrument was used to meet the specific needs of BCM – there was the correct range of luminance and chromaticity to be of value as a specialized outcome measure [5]. In addition, the instrument was a fundus perimeter (also called a microperimeter), i.e. it allowed for visualization of the fundus during measurements of spatial resolution, thereby insuring that the stimulus was in the retinal region of interest. In preliminary studies of a BCM patient, red gratings on bright blue backgrounds were not detectable even at the highest contrast levels. This was consistent with the expected pathophysiology in BCM. Blue gratings on bright yellow backgrounds tapped perception originating from S-cones and were detectable.

Conclusions to date are that the modified fundus perimeter provided a promising first step towards presenting varied stimuli with a wide range of luminance and chromaticity and precise spatiotemporal control locked to retinal features in BCM [5]. Further steps now need to be taken to study a wide range of BCM patients and determine intervisit variability in anticipation of developing a protocol for a clinical trial.