BCM is transmitted through genes that have been passed from parents to their offspring (children). 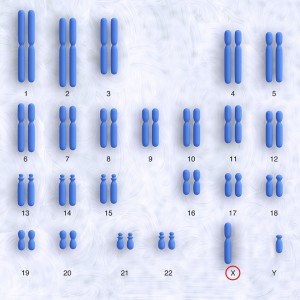 BCM is genetically transmitted through the X chromosome. 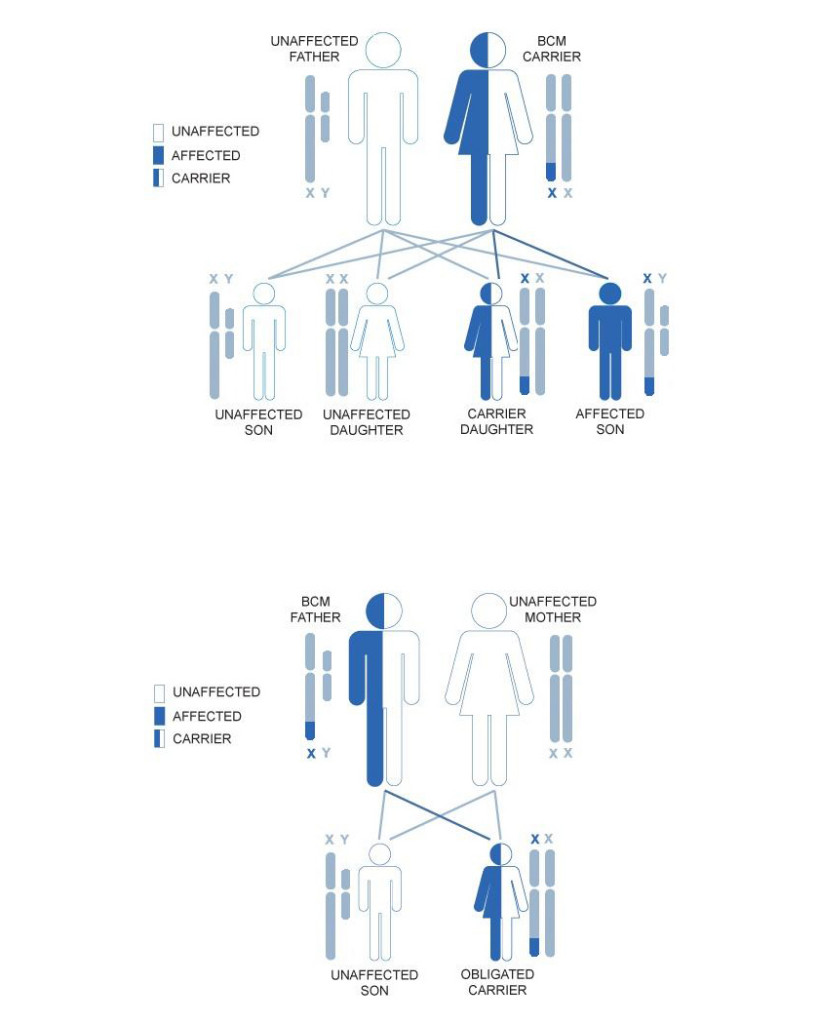 In an X-linked recessive disease, the disease affects hemizygous males (with 1 BCM affected X) and very rare females that is females with 2 X chromosomes, both with the BCM mutations. Then it is not impossible for a female to have BCM, but it is extremely rare (1 case in 10 billion).

Usually females with only 1 X chromosome affected do not manifest the symptomps of BCM but there is a phenomenon called ‘skewed X inactivation’. Typically, females have one X chromosome that is randomly inactivated in each cell. This allows for the same dosage of genes between males and females. Occasionally, this inactivation becomes skewed towards one particular copy of the X chromosome. If the X chromosome with the normal gene has skewed inactivation, then a female may manifest the symptoms of an X-linked disorder. Roughly 10% of carrier females of an X-linked disease manifest some symptoms of the disease, usually in a mild form with respect to affected males.

The following article reports the case of a female carrier affected by BCM due to a non normal process of X inactivation:

A typical BCM family history may include brothers with BCM and a grandfather and/or male cousins with the disease on the mother’s side.

It is important to reconstruct and draw up a family history (pedigree or family tree) in order to understand whether the disease affecting the family is linked to the X chromosome or not.

Let’s take a look at a typical pedigree:
(The picture is from the web site NCBI )

It is possible to have many males affected in the same family, connected by carrier females.
There is no male-to-male disease transmission (ie. fathers to sons).
Each line of the Pedigree is a generation of the family; the generations are indicated in Roman numerals, on the left, as O, I, II, III, IV, V etc.. The squares represent males and the circles females. Female carriers have a dot in the centre of the circle, while males with the disease are represented by a filled-in square.

The empty symbols represent individuals who neither have the disease nor are carriers.
Note that affected males in the same family are always related through females.
The disease may lie dormant for several generations, in which only female carriers are present.

Next figure is from the research article: A.V. Cideciyan ‘Human Cone Visual Pigment Deletions Spare Sufficient Photoreceptors to Warrant Gene Therapy’, HUMAN GENE THERAPY 24:993–1006 (December 2013). PMID: 24067079. The research has been conducted with the help of BCM Families Foundation. The figure shows many pedigrees of families affected by BCM: 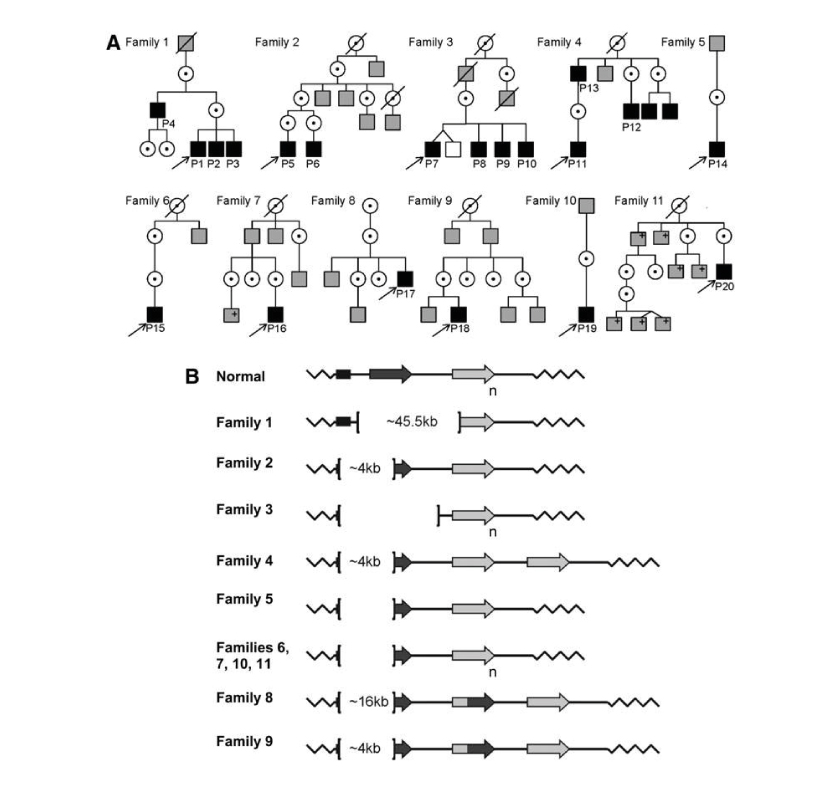 Pedigrees and genotypes of BCM Families.
In previous picture: (A) Pedigrees of the 11 families. Black filled squares: males diagnosed with BCM based on clinical evaluations and molecular testing; gray-filled squares, affected males by history; +: positive for familial BCM mutation; unfilled squares: unaffected males by history; dotted circles: carrier females. (B) Schematic representation of BCM genotypes. In individual with normal color vision, the X-chromosomal OPN1LW/OPN1MW gene array consists of a proximal long-wavelength-sensitive opsin (OPN1LW) gene (dark-gray arrow) and one or more middle-wavelength-sensitive opsin (OPN1MW) genes (light-gray arrow) arranged in a head-to-tail tandem repeat. Subscript ‘n’ indicates one or more M pigment genes. L/M hybrid genes are shown (dark-light gray arrow). Each gene is preceded by a proximal promoter and the expression is controlled by a single LCR upstream of the array (black rectangle). Genetic analyses implied that the OPN1LW/OPN1MW gene clusters in all patients of this study were impaired by large deletions affecting the LCR and varying parts of the opsin gene cluster with the exception of Family 1, which had an intact LCR with a deletion spanning the OPN1LW and OPN1MW genes.
Brackets demarcate the deletions; deletion size is indicated inside the brackets where defined.