There is currently no specific treatment for BCM, but recent progress made by gene therapy on a number of diseases of the retina (Leber’s congenital amaurosis and choroideremia) makes this disease a potential candidate.

Gene therapy consists of an injection into the retina, using as a vector a virus unable to replicate (and therefore unable to cause damage) to introduce a specific gene into the cells of the patient.
The name of the virus is adeno-associated virus, AAV. AAV is a small virus which infects humans and some other primate species. AAV is not currently known to cause disease and consequently the virus causes a very mild immune response. Gene therapy vectors using AAV can infect both dividing and quiescent cells.

The virus injected into the retina infects the cones, into which it introduces the correct gene sequence, the same sequence contained in healthy individuals. This sequence does not replace the mutated copy of the gene into the nucleus of the cones of the patient, but introduces the missed protein inside the outer segment of the cones. 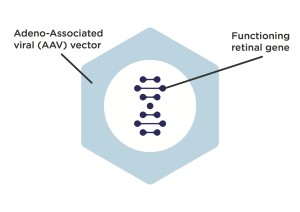 Step 1: Scientists modify an adeno-associated virus (AAV), a common virus that is not known to cause any disease in humans, by stripping out what’s on the inside of the virus and replacing that with a functioning copy of a L-opsin or M-opsin gene. 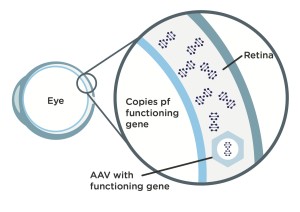 Step 2: When doctors inject intravitreally the modified (AAV) vector in a patient’s eye, it travels into the patient’s retinal cones cells. Once inside cones, the vector passes on the functioning copy of the L-opsin or M-opsin gene the BCM patient needs, which was harbored in the AAV vector.

This correction carried out using gene therapy is not “passed on” to children and grandchildren, so affected individuals in the following generations must repeat the treatment.

In the case of Leber’s congenital amaurosis and choroideremia, following laboratory studies and tests on animal models, clinic trials were started, during which numerous patients from different countries were successfully treated.

For BCM, scientists have created an animal model, on which they are starting to test the gene therapy.

To learn more about AAV and gene therapy of the human please click here.

BCM Families Foundation created of a new experimental model, the BCM C198R mouse. This mouse line was created with CRISPR technology to precisely model the cysteine-203-to-arginine (C203R) Blue Cone Monochromacy mutation found in the human LWS/MWS cone opsin gene(s). [The 198 vs 203 numbering difference reflects the different lengths of the mouse and human proteins]. This amino acid substitution mutation is responsible for Blue Cone Monochromacy in approximately half of all people affected by the disease world-wide. The BCM C198R mouse line is the first preclinical model available for studying the specific pathomechanisms associated with Blue Cone Monochromacy and to test potential therapeutic approaches.
Starting in September 2018, C198R mice will be available at The Jackson Laboratory (Stock No. 031385). Find here more information on the BCMFF-C198R mouse or ask for more information via email at: info@BCMFamilies.org.

Here you find research papers about animal model with disease similar to BCM:

Here you find a gene therapy result about color blindness in adult primates: