BCM is a rare genetic disease of the retina caused by genetic mutations on genes OPN1LW, OPN1MW and LCR. These genes are located on the X chromosome and encode proteins called photopigment, needed in the red and green cones to capture light.

On this page we will see what are the genes responsible for color vision, what are the genetic mutations that lead to disease and the history of these scientific discoveries of molecular genetics.

The BCM Families Foundation supports the research of Molecular Genetics on BCM and the creation of a BCM Patients Registry, in order to deepen the knowledge about the genes and the genetic mutations that cause disease.

BCM is inherited from the X chromosome. As any other chromosome, X contains a long molecule of DNA, the chemical of which genes are made.

The X chromosome is composed of two arms, the upper is called p, the lower q.
The genes involved in the BCM are in position Xq28, at the end of the q arm.
In the figure below we see the X chromosome: 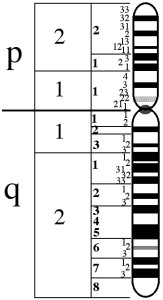 In the position Xq28 there are in order, the genes named LCR, OPN1LW and OPN1MW.

OPN1LW and OPN1MW are respectively the genes that contain the genetic code for protein opsin. These proteins constitute the photopigments for the capture of light, red (Long Wave) and green (Medium Wave).

Many people have several replicas of the gene for the green photopigment, OPN1MW. Only the first two genes, immediately after the LCR, (the red and the first green ones), are expressed in the retina. Approximately 25% of male Caucasians have a single OPN1MW gene, while 50% have two genes and the remainder have 3 or more genes.

In the following figure we see a representation of the opsin gene array in a normal case:

To learn more about these genes, please refer to the web site of the ‘National Center for Biotechnology Information’, NCBI, particularly to:

OPSIN Genes – Picture is taken from

They take the form of a chain passing 7 times through a disk of the outer segment of a cone. The three proteins are very similar between them and, in particular, the M and L differ only in some elements that compose them. The two photopigments, red and green are in fact equal to 96%, while they have only a 46% similarity with the blue photopigment.

The genes OPN1LW and OPN1MW, like all genes, are formed by exons and introns. In particular both of these genes have six exons, referred to as 1 to 6.

Like all proteins, the opsin proteins are three-dimensional structures that need to perform a ‘folding‘ to assume their final three-dimensional shape. Some specific amino acids within the protein are responsible for the folding of the same.

There are many genetic mutations that can affect this group of genes, LCR, OPN1LW and OPN1MW.

Some mutations lead to conditions commonly called ‘color blindness’, having as its only effect the inability to distinguish certain colors.

Mutations that lead to the BCM to date identified are the following:

This mutation is an absence of a large part of the genetic material. Since there isn’t the genetic code for LCR the two opsin proteins will not express and the cones will not have the red or green photopigments.

2.
Intragenic deletion. This is a deletion of exons within the genes OPN1LW and OPN1MW or deletion of genetic material of the first and of the second gene.

Even this mutation is an absence of a large part of the genetic material.

Mechanism in 2 steps with homologous recombination and inactivation.

In this case, due to the similarity between the two genes OPN1LW and OPN1MW, during a process of ‘homologous recombination’ one of the two genes is lost with the creation of an hybrid gene. Subsequently, a point mutation inactivates the remained gene.

The point mutation best known is the so-called C203R. The name of the point mutations indicates the position at which mutation has occurred, in this case the amino acid position 203 and which has been replaced, in this case a C = Cysteine with an R = Arginine. At the level of codons this substitution is timely because it corresponds to replace thymine with cytosine in position 648, as we see from the following table: 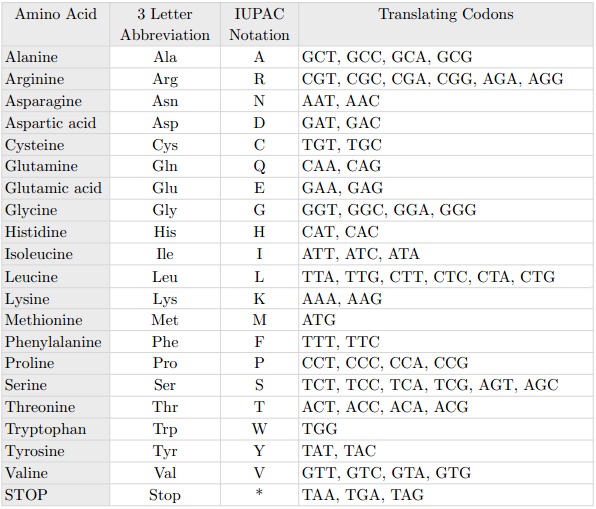 The C203R mutation causes the opsin protein once formed to not fold into the proper three-dimensional form. 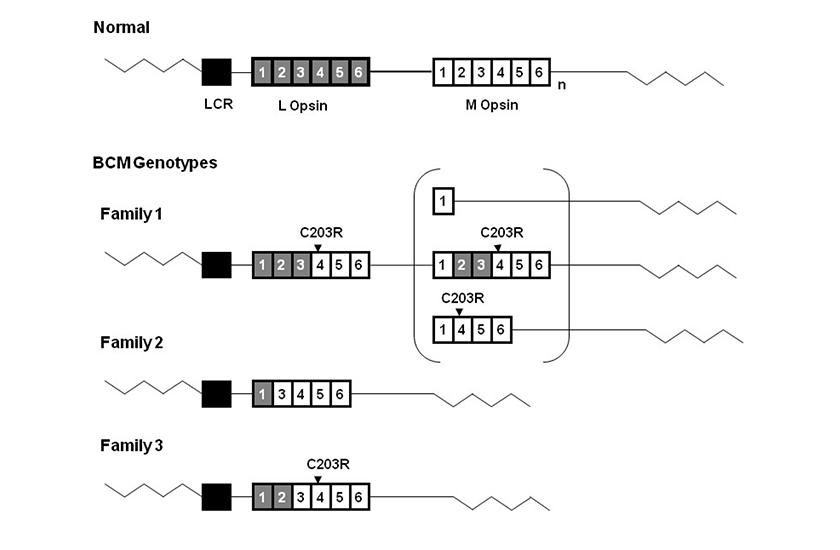 Other point mutations are the P307L, and R247X. The last one replaces arginine with a stop codon at position 247 which prevents formation of the protein (nonsense mutation). 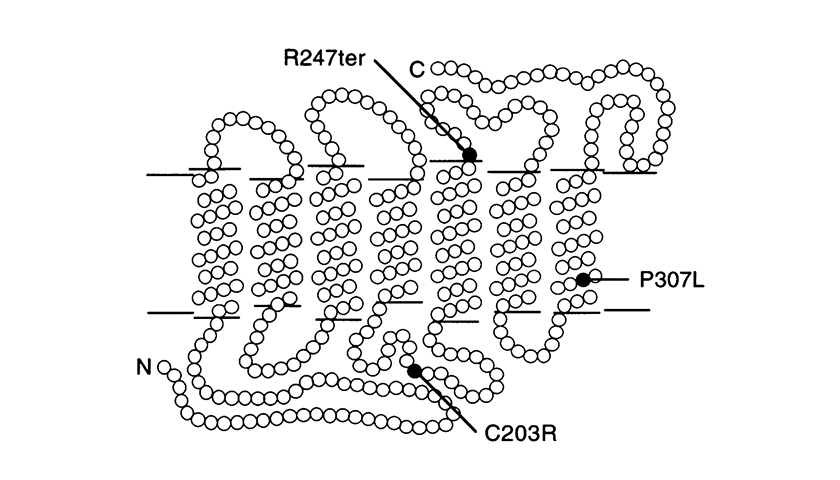 Model of the red and 5’ red – 2’ green hybrid pigments in the photoreceptor membrane showing the locations of point mutations identified in blue-cone monochromats. Each circle represent an amino acid. ‘N’ = amino-terminus and ‘C’ = car-body-terminus. The amino-terminus faces the extracellular space.
The picture is taken from J. Nathans et al. Am. J. Hum. Genet. 53: 987-1000, 1993.

Other mutations on genes OPN1LW and OPN1MW that lead to the BCM are constituted by a set of point mutations called for example LIAVA. The BCM will be caused by the production of new hybrid gene, like in the previous case, from the homologous recombination of OPN1LW and OPN1MW. In this case exon 3 contains the following amino acids in the positions indicated: 153 Leucine, 171 Isoleucine, 174 Alanine, 178 Valine and 180 Alanine. This genotype has the abbreviated name LIAVA. 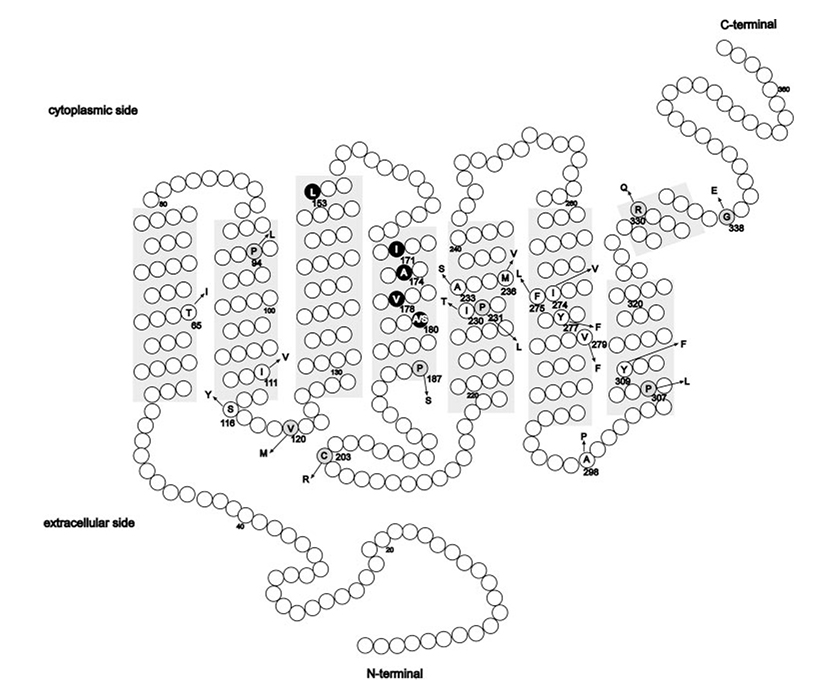 Location of amino acid alterations reported thus far in the L and M cone opsin genes. Shaded areas: the transmembrane domains. Circles: amino acid differences and known polymorphism with the more common amino acid (in a one-letter code); arrow: the amino acid change. The codon number is depicted for each change. Missense changes associated with a cone-opsin-related disease that are likely to cause protein dysfunction are on a gray background. The LIAVA haplotype is highlighted in black.
Picture is taken from Mizrahi-Meissonnier L., Merin S., Banin E., Sharon D., 2010.

Other diseases with genetic mutations on genes and OPN1LW OPN1MW

Another disease of the retina that is associated with the position Xq28 is the Bornholm Eye Disease (BED), with symptoms similar to those of the BCM. It is a very rare disease and it is stationary. For further information you can consult OMIM and the web site of University of Arizona.

Finally note there is also a particular mutation of the two genes OPN1LW and OPN1MW which causes a different disease from the BCM. This type of mutation is W177R and is a misfolding mutation that, if present on both opsin genes causes cone dystrophy with evidence of degeneration and cell death of the cones.

The History of the discovery of the genes of the BCM

Many researchers have contributed to discoveries about the genes involved in the BCM.

We recall the fundamental discoveries of Jeremy Nathans on the genes responsible for color vision:

In particular, the work that led us to understand the main causes of BCM and in particular the 2-step process with point mutation C2013R:

An important work for the type of mutations ‘Deletion’ of the LCR or LCR and the gene OPN1LW is:

For the Deletion intragenic the following works identified a case of BCM with the presence of only the gene OPN1LW (red) without the exon 4:

The Locus Control Region, and its role in the expression of opsin genes, was the result of the following works:

In particular, the role of LCR that allows the exclusive expression of a unique opsin (red or green) in each cone, was reported in the last publication.
For the study of the C203R mutation please see the following research publications:

who understood the negative effects of this mutation on the folding of the opsin protein and:

who studied this mutation and its frequency of about 2% in people of Caucasian origin.

On rare mutations of the type LIAVA you can consult:

Some historical research about BCM were:

For the study of cone dystrophy, a degenerative disease caused by a point mutation on both genes OPN1LW and OPN1MW:

Here there are some review publications that illustrate the topic: